Research Engagement and ImpactTracking the marine ecosystems in South Australia

How can some of the smallest marine organisms, even down to the plankton level, help monitor water quality? Researchers at Flinders will be creating a record of zooplankton and copepods, small crustaceans, communities in the Coorong and Onkaparinga estuaries. By recording these communities, this will enable researchers to, firstly, have the first organised record of the biodiversity of the estuaries, and secondly, a recording of some species habitat ranges. Both of these records will enable researchers in the future to better track water quality. 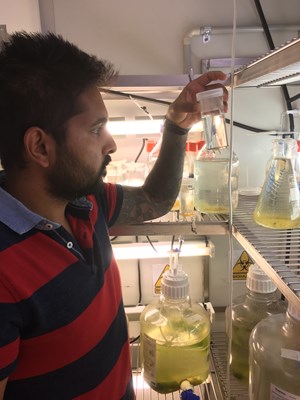 Copepod culture and preparation before dissection

Zooplankton communities are more susceptible to changes in water quality, and because they are at the base of the aquatic food chain any effects on those communities will trickle up the food chain. By creating that record of these communities, it will allow researchers in the future to be able to make qualified judgements on the changes to water quality, pollution, and human caused change to our local estuaries. The focus on recording both the types of organisms and their habitat ranges will also allow conservation, monitoring and future modelling of change.

Copepods have been used by researchers as indicators on biodiversity in water bodies previously. The Coorong is home to several copepod species that are unique to South Australia. One of those species is very close to another species from Port Phillip Bay, Victoria. So close, that they are considered to be allopatric sibling species. DNA barcoding of the Coorong Acartia cf. fancetti copepods, which only occur and grow in a vastly different habitat range from their Port Phillip ‘cousins’, will be compared to those ‘cousins’ for the first time. The aim will also be to identify other species in the estuaries that have distinct habitat ranges.

Sampling and analysis started in November and December 2016 with funding from the Sir Mark Mitchell Research Foundation. The Flinders team of Mr Deevesh Hemraj, and Associate Professor Sophie Leterme, with Dr Russell Shiel (Visiting Research Fellow at the University of Adelaide) aim to finish the analysis and sampling by December 2017 and have a number of manuscripts prepared for submission to peer reviewed journals.