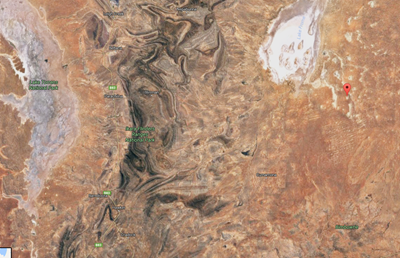 Lake Pinpa (red marker) in the Frome Downs area with the Flinders Ranges to the left. (google maps)


What is so important about the Oligocene period, and, especially, about fossils here in South Australia? It was the period during which most of Australia’s modern marsupial families evolved. The end of the Oligocene period, about 25 million years ago, was also the time of transition to a global greenhouse from the cooler conditions created when Australia separated from Antarctica. By looking at fossils from this period, it gives us greater understanding of the effect that global climate change had on this fauna. For the first time near-complete koala, kangaroo and bird skeletons have been discovered from the area around the southern end of Lake Frome. 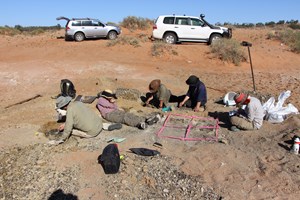 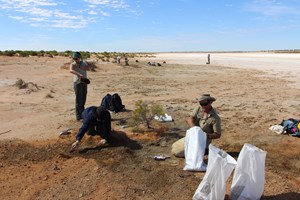 Top: Excavation site at Lake Pinpa. Fossils are found in  a thin clay layer close to the surface.
Bottom: Collecting fossils at Billeroo Creek, South Australia. In the foreground, from right to left, TH Worthy, Warren Handley and Ellen Mather are excavating a rich layer of bones  to collect bulk material for processing in the lab.
Photos by Aaron Camens

Past the Flinders Ranges and heading toward the border with New South Wales, the Frome Downs area has been of interest to palaeontologists since an American Museum led expedition in 1973, which found abundant fossils exposed on the bed of Lake Pinpa. Some of those finds are only just now being identified. In 1975, rain washed sediments from the nearby dunes onto the lake bed, and those fossils still in place have remained hidden since. In 2006, Professor Rod Wells with future Flinders palaeontology researchers Dr Aaron Camens and Associate Professor Trevor Worthy visited the lake, considered then to not be productive for fossil finds, and the nearby Billeroo Creek. At the creek a large hoard of fossils was found, including two new species of cormorants in the genus Nambashag.

The group travelled again to the region in 2015 to revisit the sites found in 2006 and to locate new ones. What was discovered included the first articulated or associated skeletons of a new raptor, a basal kangaroo, and a koala in the genus Madakoala. The funding from the Sir Mark Mitchell Research Foundation in late 2016 has allowed the group to continue and expand the expeditions to the area.

The two week expedition in March 2017 had the group re-examining many of the sites from the first 1970s expeditions. A large number of new fossils were found, including another extraordinarily well-preserved koala skeleton complete with the first skull known for any late Oligocene koala. This skeleton is part of an Honours project for Amy Tschirn. Lizard fossils found are contributing to a PhD project for Kailah Thorn.

Most of the finds are still awaiting preparation in the Flinders Palaeontology Laboratory, but further rare discoveries are anticipated. “This research programme is contributing greatly to the inventory and reconstruction of the late Oligocene fauna, which provides a key insight into the evolution of Australian’s modern fauna,” said Trevor.