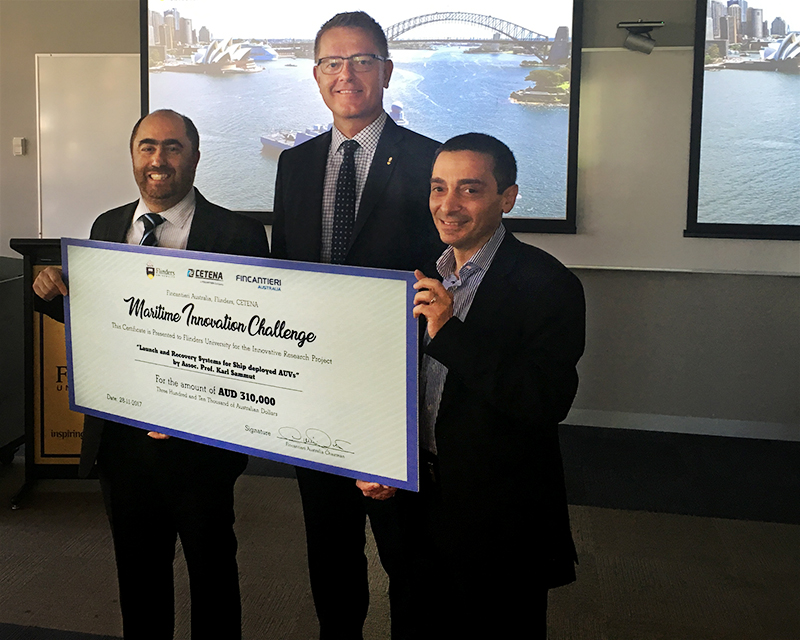 Flinders’ close links with Italy moved a step closer with the announcement of the winning project for the Inaugural Fincantieri – Flinders – CETENA Maritime Innovation Challenge. Associate Professor Karl Sammut at the Centre for Maritime Engineering, Control and Imaging (CMECI) won for his project on Launch and Recovery Systems for Ship deployed Autonomous Underwater Vessels.

They will receive $310,000 towards the project, which also involves the research team collaborating with the University of Genoa, one of Fincantieri’s key academic partners in Italy.

The scope of the project is to develop an automated system for launching and recovering autonomous underwater vehicles (AUV) from a ship. Existing launch and recovery methods require the use of manned boats to assist the process, making it a very hazardous process for both the crew and the vehicle. This project will involve the development of automated guidance systems that direct the vehicle back towards its mothership as well as the development of the towed docking station that is used to release and capture the vehicle. The result of the study will eventually lead to safer AUV deployment and recovery systems that can operate even under inclement sea state conditions, thus increasing the weather operating window within which such vehicles can be employed.

Each proposal was assessed on not just the immediate ability for the project to deliver on the research methodologies but also for commercial application in a 3-5 year timeframe. The Challenge received excellent proposals, and further opportunities are being explored for the proposals submitted to the challenge. A key selection criteria was for the research groups to consider the ability of their research to work with their Industry partner’s goals – taking the research to the market.

Launched at the Pacific International Maritime Exposition in October, by Vice-Chancellor Professor Colin Stirling, along with Mr Dario Deste, Chairman of Fincantieri Australia, and Mr Sandro Scarrone, President of CETENA, the Maritime Innovation Challenge was aimed at creating a 12 month project addressing Fincantieri’s competitive identified drivers. Proposals were developed within a 3 week time frame and included collaboration with the University of Genoa in the development of the technical activities.

A Memorandum of Understanding was signed between Flinders and the University of Genoa in January 2017 to cooperate in research and development and training with focus on maritime, naval architecture and shipbuilding. This Challenge provides a tangible focus for further collaboration.