New OpportunitiesFresh Science - do you have a story to tell? 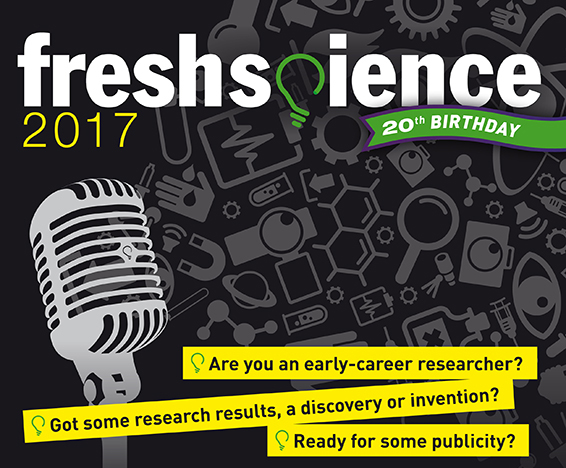 Fresh Science is a national competition offering up to 10 up and coming scientists in each state with a day’s media training and skills needed to present their work to the media, the public, and school kids and at the pub. Past Flinders scientists who have been selected include Dr Mona Awadalla and Stephanie Shepheard in 2016, and  Dr Justin Chalker in 2015.

Stephanie's story in 2016 was on the simple urine test that aimed to show the severity of Motor Neurone Disease (MND) in a patient. This was the first time there was a measurable test for MND that could assist in seeking effective treatments. Mona and her colleagues had discovered a gene mutation which lead cause the development of smaller eyeballs. This mutation was present in one family, where 16 members had developed glaucoma. Justin and his fellow chemists at Flinders developed a new material which could completely remove mercury from soil and water.

This call for early-career researchers who have peer-reviewed results, a discovery or an invention that has received little or no media attention is now open and will close on 31 August 2017. Fresh Science has helped over 500 scientists in the 20 years the competition has been run.

A Fresh Scientist should be:

To view past stories and to nominate, visit the Fresh Science website.

Check out the selection criteria, read ahead and see what questions will be asked, then go online and nominate via the short, easy, online application form.

The training and events will be held from late October to early December – Fresh Science will post the dates on their website.

In each state, they will select the top ten applicants. If selected, you will get:

One story per state will be written up as a press release and issued to the media.